Alphabe Thursday: C is for Chipper

Note: Timing is a funny thing. Last Thursday our assignment was  the letter "B" and I had intended to discuss Border Collies. But early that morning, I had to have my beloved Chipper put to sleep. I didn't feel like talking about anything, much less Border Collies. How perfect that this week we would have the letter "C", which gives me the perfect opportunity to write about Chipper. I realize this is a very long post and you might not read all the way to the end, and that's OK, I'm writing this because I know it will be good therapy for me. 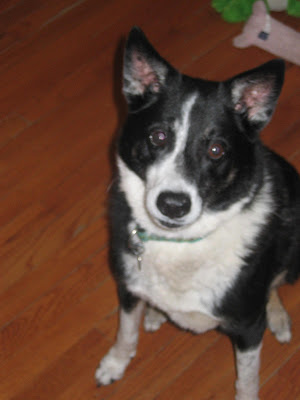 Chipper Dec.6,1994 -April 28, 2011
Which words would you use to describe your dog?
Intelligent...Funny...Courageous...
Sweet...Loyal...Playful...
Protective...Talented...Lovable...
Athletic...Energetic...Ornery
Chipper was all these things and more! Our Vet would often remark that he couldn't look Chipper in the eyes because he was smarter than half the people that came into his office. We were so lucky to have Chipper for sixteen wonderful years, not bad for a pup that was never supposed to live. I can't tell Chipper's story without telling about his very cruel and sad beginnings.
Chipper's story begins one rainy, winter night in 1995. My boss' wife was heading home on what was then a fairly rural road. Her headlights caught something moving in the road up ahead. She slowed and came to a complete stop. There, in the middle of the road was a box that had puppies crawling out of it and dangling from the sides. She put her flashers on and walked over to the box. As she was putting the puppies in the box another car approached from the opposite direction. The car came to a stop and a woman exited the car and came over to help collect the puppies. Just as they had all the puppies rounded up, a third car approached but this time a very angry women came over to the duo and said "I'll take those puppies". She snatched up the box and sped off in her car. My boss' wife and the other women were left looking at each other and wondering what had just happened. They were convinced the third women must have known who dumped the puppies. I have wondered many times what fate awaited those poor puppies. As they said their goodbyes and headed off to their cars, they spotted something moving at the side of the road.  Much to their amazement, two puppies had managed to escape.  My boss' wife went after and caught one of the puppies but the other gal was not able to catch the other pup before he slipped off into the woods.
I worked in the basement of my boss' home and the next day when I arrived at work, his wife met me at the door. She said "I have something to show you". I opened the door and immediately noticed a shoe box sitting in the middle of my desk. I put my purse down and walked over and peered into the box. There in the box was a tiny black and white ball of fur. The little pup was not moving and was barely breathing. His eyes were completely matted shut and there were patches of fur missing. My boss' wife looked at me bewildered and said "what am I going to do with it?". I told her I would take him to my vet and they would just take care of it. So off I headed to my vet with the shoe box holding the tiny pup. When I arrived at my Vet, I retold the little pup's story. They said they would check him out and take care of what needed to be done. I left, assuming they would euthanize him and that would be the end of the story. 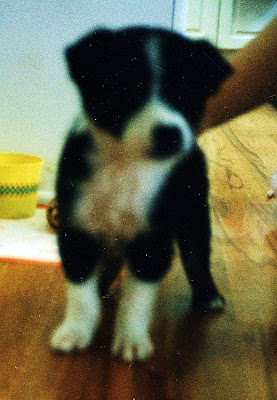 The next morning I arrived at work and got busy working on a project. I hadn't been at work long when the phone rang, it was my Vet's office calling. The voice on the other end said "you can come get your puppy!" I didn't know what to say at first, then I blurted out "MY puppy, I wasn't going to keep him!". There was dead silence on the other end and finally the girl at the Vets said, "well, I guess we could do something with him". I thought for a second and told her I would come get him, my sister had been thinking about getting a new dog and this little guy would be perfect. When I arrived at the vet, they told me there was really nothing wrong with him. He was a little malnourished, weighing only 2 pounds and 4 oz.. They treated him for an eye infection and worms and he was actually in pretty good shape considering what he had been through. They also told me they thought he definitely had Border Collie in him, if not 100% pretty close to it.
Of course when I brought him home my girls fell in love with him. He was so tiny, they would put him in their Barbie car and push him around the house.  But hubby said NO MORE DOGS! 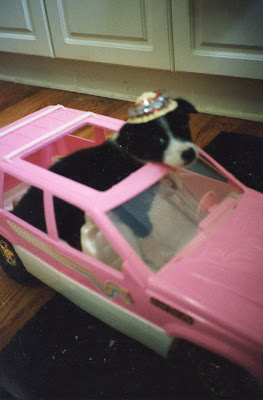 I called my sister that evening and she said she would "think" about taking him. She finally decided about a week later that she was not ready to get a new dog, that meant we would now have to start looking for a new home for him. In the meantime, he was starting to put on some weight and his eyes were starting to clear up. Several weeks passed and we still didn't have a home for him and by this time we were getting totally attached to him. We had been calling him "Puppy" when one day Hubby was eating some potato chips and "Puppy" kept begging.  Hubby looked down at him and said "Your name should be Chip because you are always begging for chips! And so it stuck and once he had a name, how could we possibly find him a new home?! Well this post has gone far longer than I thought so in my next post I will share some of Chippers antics and some of the amazing things he did. But I'll leave you with one last picture, Chipper sleeping with one of his new Christmas presents. 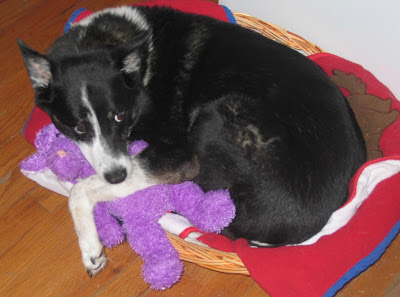 Please stop by Jenny Matlocks for Alphabe Thursday! for the Letter C!
Posted by NanE at 12:01 AM