Hi Everybody and Happy Pink Saturday!
This is the second part of My BIG Backyard Makeover. If you missed Part I, you can check it out HERE.
As I told y'all in my previous post, Mr Bubble and I own almost two acres, the majority of which have never been touched by human hands. Mr. Bubble has been working on the West Coast all Summer so I decided to surprise him with a tropical, Caribbean themed backyard makeover. I concentrated on an area centered around our pond, it measures about 70 feet long and includes a shed, the pond, a natural area between the pond and shed and a large berm (mound of dirt). Today I'm going to show you the berm and the pond makeover. There's a lot to see, so let's get started!
Mr Bubble and I built the pond about seven years ago and one of the results of building a large pond is the large amount of dirt that has to be dug out. Well that dirt has to go somewhere, so Mr Bubble and I bermed it up behind the pond to create the waterfall. We have never really done anything else with that large pile of dirt so it had become overgrown with weeds and just looked awful. Here is a shot of the area before I started. 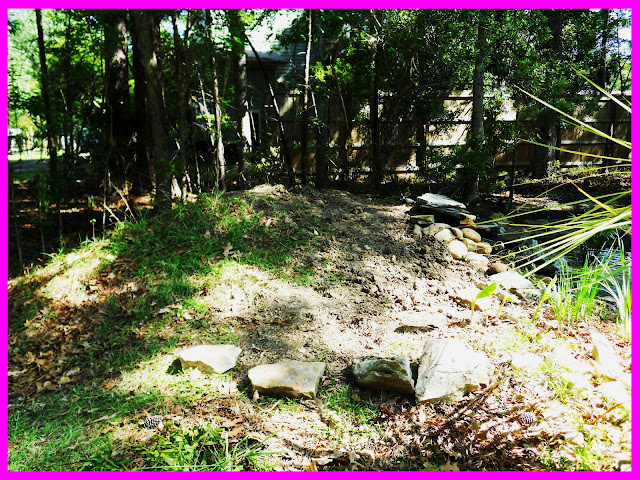 The first step was to level the dirt and give the berm a nice rounded shape. I had to dig and dig and dig some more. Once I had the berm shaped, the next step was to build a stone retaining wall. I dry stacked the stones ( meaning they are not mortared together) two high then filled the area with some really rich dirt. Once this was done, I removed any remaining weeds and replanted the area with some great tropical plants. I wanted the area directly behind the waterfall to be a focal point so I planted two large Alocasia Odora, sometimes called Elephant Ears. If there is a drama queen in the plant world, it would be this plant! I also planted a Croton, the smaller plant with the multicolored leaves. On the berm I planted some Kimberly Queen Ferns, along with some pretty PINK Vinca and PINK Portulacca. Here's an "AFTER" shot of the berm. 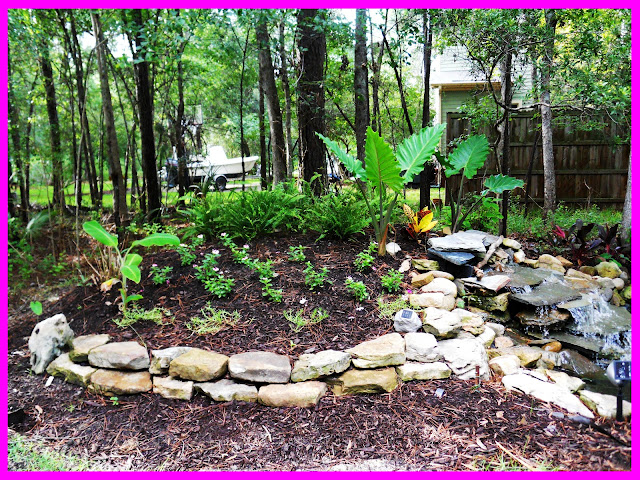 Next I tackled the area around the pond. A couple of years ago I thought it would be a good idea to put a large border around the pond about 4 feet out from the edge. The border consisted of large rocks and pea gravel ground cover. Well it turned out to be a really dumb idea! It was impossible to keep the gravel clean and free of weeds and leaves. Here's a shot of the pond before I started, yes, my Jack Russell Hippy loves to swim! 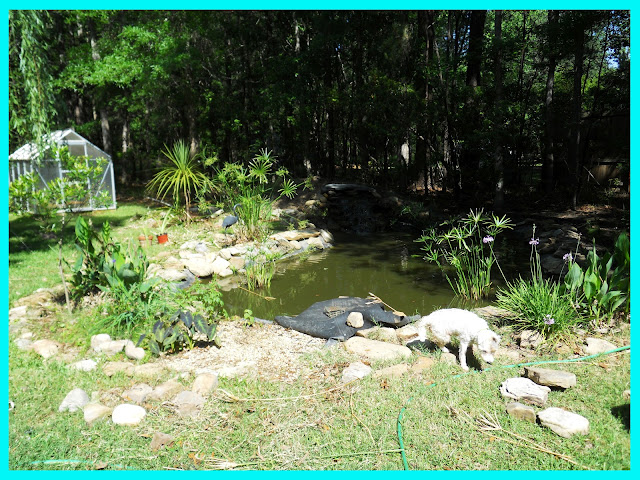 First I raked up all the gravel and took up the large rocks. This was back breaking work but I was determined to follow through. Next I laid out and cut a nice, new, curvy bedline, added lots of new plants and put down a nice dark brown hardwood mulch. And here's an "AFTER" shot of the same area. 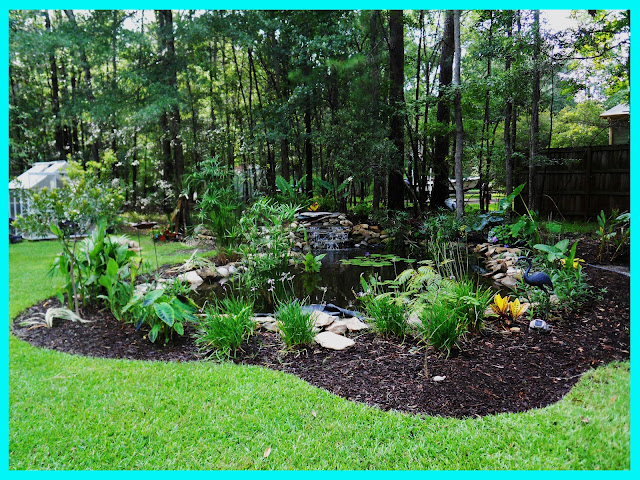 Most of the existing plants were located on the front side of the pond which is really sunny while the back side which is really shady had very few plants. I was really excited to plant the shady side because some of my favorite plants thrive in the shade.  I added three more varieties of Elephant Ears, a Chinese Fan Palm, a Blue Endless Summer Hydrangea, a PINK Mimosa Tree, PINK Caladiums, a Giant Leopard Plant, PINK Impatients, Society Garlic, Ti plants and more Crotons. I want to add more plants and I know I need more color but it is just too hot right now to plant anything. Now I'll shut up and just let you look at a few more "BEFORE" and "AFTER" shots. 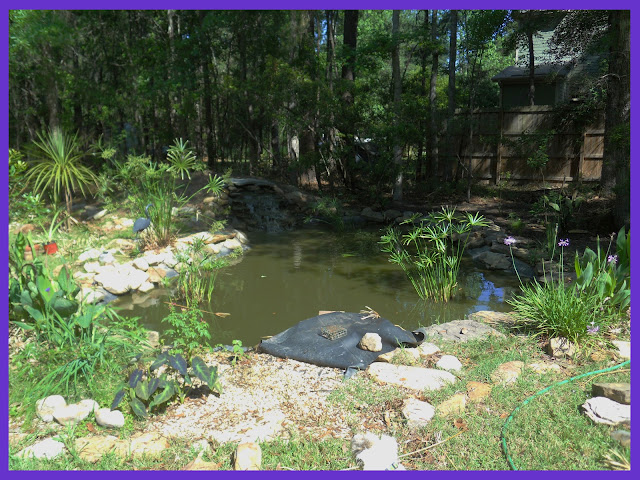 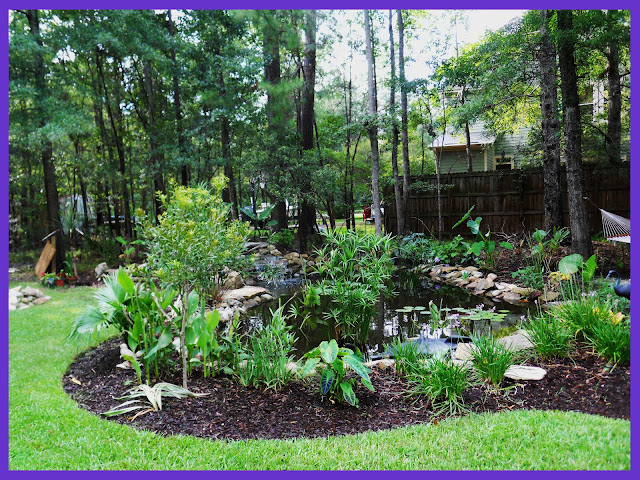 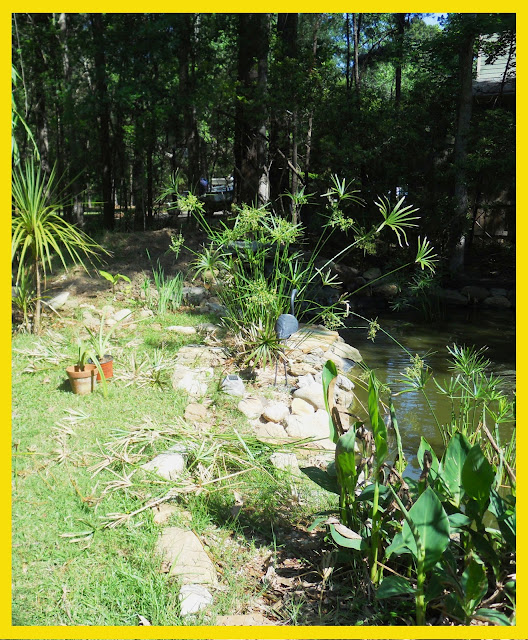 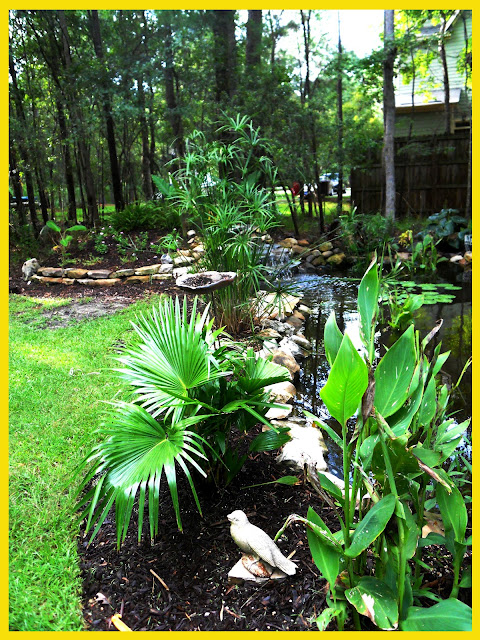 Tomorrow I will show you what I did with the shed and the natural area between the shed & pond. Please stop by How Sweet the Sound where Beverly has more amazing PINK posts waiting for you! Hugs and Blessings, Nan