As I mentioned yesterday, writing about my parents and looking through old pictures and recipes has been such wonderful therapy but I did not expect to uncover some wonderful discoveries that have been right under my nose for years! I would like to share one of those discoveries today.
I am participating in Elizabeth's most adorable, Apron Pocket Swap and while working on my pockets the other night, I was reminiscing about how my Mother, Grandmother and Great Grandmother always wore aprons when they were preparing a meal. 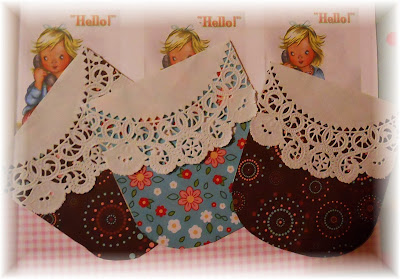 I don't have a single apron that belonged to one of these women so I thought I would try and find some pictures of them wearing aprons and in the process made a wonderful discovery! Here is a picture of my Mom and Dad. 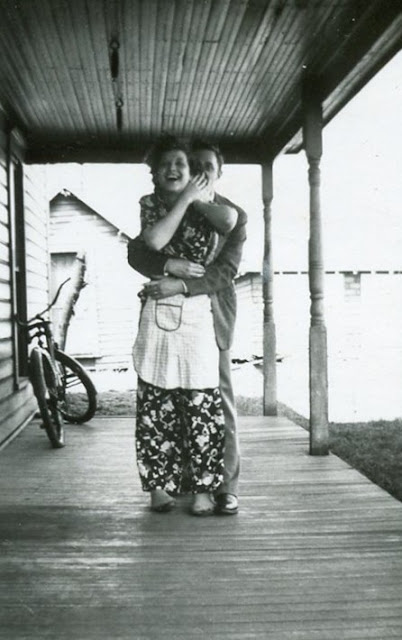 I love this picture!  What was my Dad whispering in my Mom's ear to make her giggle so?

And this stern looking woman is my Great, Great Grandmother Mary. 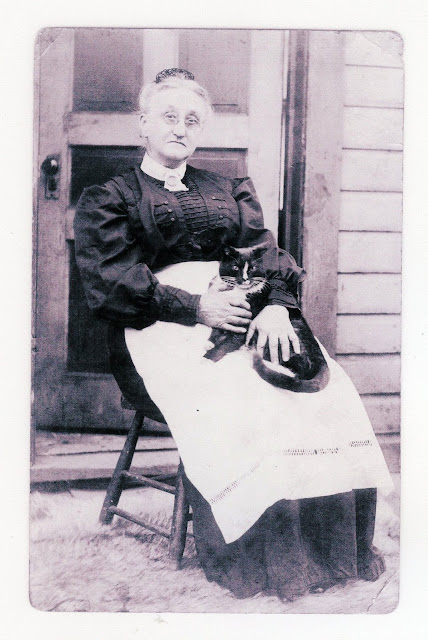 Obviously I never knew her but I don't know who looks meaner, her or that cat, LOL! But what a fabulous apron she is wearing!
This next picture is my amazing discovery. Shortly before my Mom passed away, she gave me a large envelope with photo copies of old family pictures. The picture above and the next picture were two of those photos. I remember glancing at them and then casting them aside during the hectic, stressful months that would soon follow when my parents passed away. I absolutely love this photo because it gives a little glimpse into what everyday life must have been like for these women. 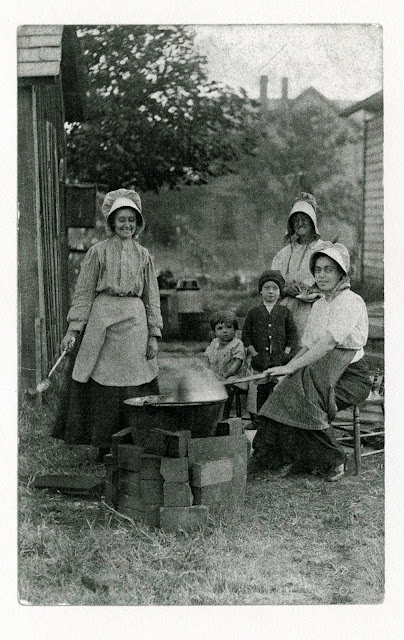 This photo had a handwritten note beside it and made note that the women were making Apple Butter and was an annual event in the fall. The woman standing to the left is my Great Grandmother Wilhelmina, the woman seated her sister and the woman standing behind the children is my Great, Great Grandmother Mary, the same woman pictured in the photo with the cat. It is not known who the children are but could be my Great Uncles Tony and Wib. Now here is my amazing discovery. Many years before they passed away, my parents gave me a few family antiques. Coincidentally, most of them belonged to my Great Grandmother Wilhelmina. Among the items was a very old large pot and a brown crock. I don't know for sure but the pot I now possess could be the very same pot pictured above! What do you think? 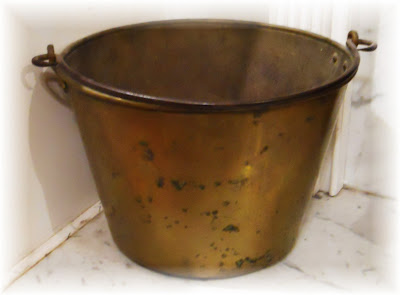 Now the crock I'm only speculating but I do know that these women stored the apple butter they so painstakingly made in crocks before canning jars were made commercially. 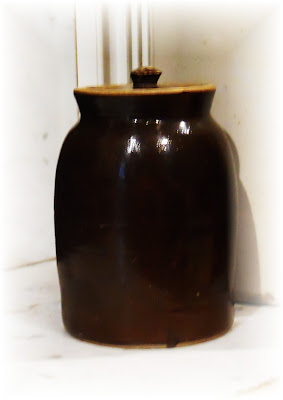 Since this crock has a lid, could this have been one of the crocks used to store their apple butter? We'll probably never know.
Now one more mystery, I remember eating homemade apple butter as a child but when I looked in Mom's recipe box, I found two recipes for apple butter but neither appeared to be the old family recipe. I will definitely have to ask my Aunt if she has the recipe! But, I did find a very old, handwritten recipe for Apple Dumplings and I'm pretty sure this was my Paternal Grandmother's recipe. I remember my Mom making these and they were wonderful! Why have I never made these myself? Well, at any rate, since it is apple season, and in honor of my Mom, here is a very, treasured family recipe. If anyone makes these, I would love to know what you think!

Apple Dumplings
Dough:
2-1/4 Cup Flour
3/4 tsp. salt
3/4 Cup Shortening
5 Tbsp. water
Sift the flour and salt together
Cut in the shortening
Add the water and mix
Roll out 1/8" thick and cut into 7 inch squares.
Apples & filling:
Nice baking apples (sorry, it didn't say what kind or how many, I know they were red and there were at least 5)
1/2 Cup Sugar
1-1/2 tsp Cinnamon
Peel and core apples then place each apple on a square of the dough. Fill each apple with the sugar/cinnamon mixture then top each apple with 1 Tbsp. of butter. Pull sides of dough up and over top of apple overlapping and pinching together the ends. Place in a lightly greased baking dish.
Syrup:
Combine
1 cup sugar
4 Tbsp Butter
1/4 tsp Cinnamon
2 Cups Water
Boil for 3 mins stirring till sugar is dissolved.
Pour Syrup over the apples and bake. (sorry, it doesn't say at what temp or for how long! I would guess 350 degrees for 30 mins?)
Posted by NanE at 11:26 AM