Today I'm going give you a little architectural lesson and take you on a quick tour of a neighborhood known as Rivertowne. Rivertowne is so named because most of the really big houses are built along the river. These houses are huge to begin with but they look even bigger because they are commonly known as "drive-unders". Because they are built along the river, they are in a flood plain and by law, any living spaces must be elevated above the flood level. The ground floor level is to be left unfinished and anything placed in that area can not be insured so most people use it as a garage, thus the name "drive-under". However, many people finish off this space and use it for exercise rooms, home offices, storage, play rooms etc. Typically, the main living spaces are on the second floor and bedrooms are located on the third and even fourth floors. And if you are thinking to yourself, geez, I'd hate to lug groceries up all those steps, don't worry, most of these houses come with their own elevators! Some even have their own putting green like this one. 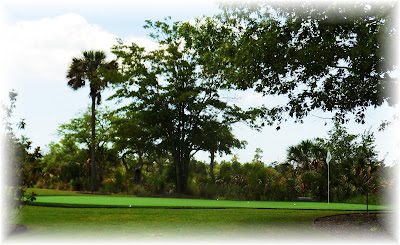 Our first stop is this gorgeous Mediterranean Style house. As always, if you want a closer look, just click on the picture! 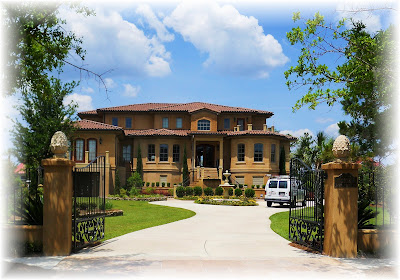 This is a style that is not seen very often in the Lowcountry but there just happens to be several in this neighborhood. I love the sundeck in the upper right corner.
This next house is also a Mediterranean  style house. 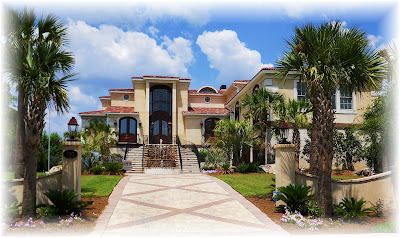 Check out this entrance! That water feature and door are amazing! 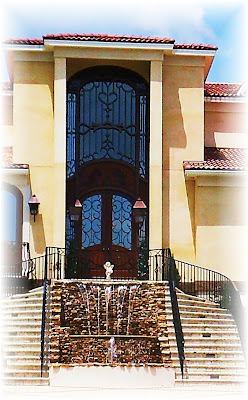 If I could criticize anything, it would be that little cherub statue sitting at the top of the waterfall, the scale is all wrong and it detracts from the door. JMHO, but I would move it down to the next level.
Now for a little history lesson. When the City of Charleston was first established, it was still under English rule. The taxes the citizens of Charleston paid to England for their homes were based on the amount of square footage that faced the street. The ever rebellious and crafty Charlestonians came up with the perfect solution. They turned their houses sideways so the narrow side of the house faced the street and the widest part extended deep into the lot away from the street and the "Charleston Single House" was born! The "Charleston Single House" was also influenced by West Indies traders who added wide verandas on both floors to catch the breezes coming off the ocean. 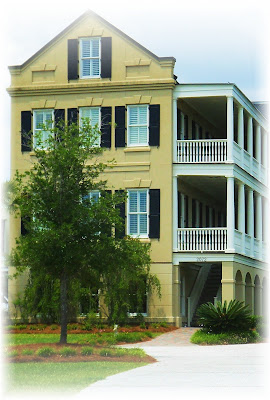 Paying taxes to the king is no longer an issue so over the years the "Charleston Single House" has been revised and extended out on the sides but it still remains one of the most popular styles in the Lowcountry. The house pictured above is actually an example of a new Charleston Single and actually looks like this: 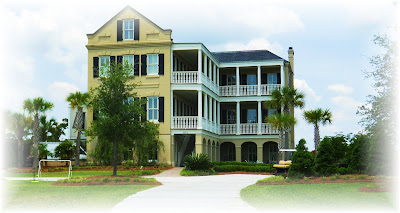 You will notice this house has been pushed out on both sides and unlike old Charleston Singles, has been elevated to accommodate the parking of cars under the house. This concludes our home tour for today. I hope you enjoyed it and will come back next week for a peek at more amazing houses.
Posted by NanE at 9:20 AM